HOW TO CARE FOR YOUR CHLOROPHYTUM (SPIDER PLANT)

Known as one of the most adaptable and easygoing houseplants on the market, the Spider Plant is a real favourite of ours. Unlike most warm-weather species, these plants aren’t too fussy and rarely present their owners with more complex problems than the odd brown tip here and there. Loved for their casacading ‘spiderette’ leaves, these plants make a lovely addition to shelving units, coffee tables and terrariums! 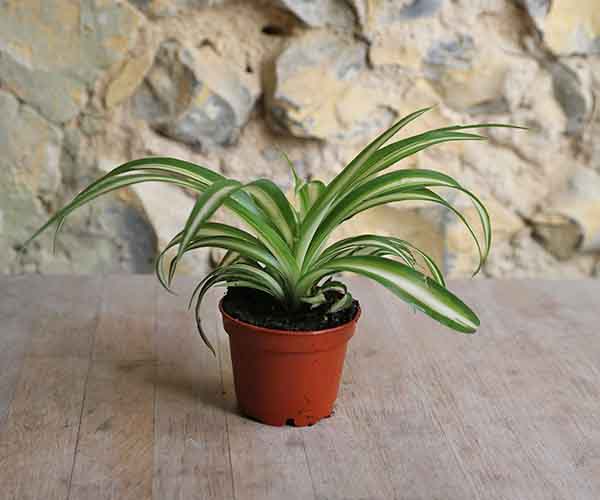 Where Does It Come From?

Native to the roasting climates of the southern African continent, these plants were picked up in the 1800s as favourites of Victorian-era colonisers and scientists who then subsequently naturalised the plants in other far-flung colonies such as Australia. In fact, these plants were so fashionable during this time that almost every upper class household in Victorian London had one!

Why Should I Get One?

How Big Can It Grow?

Chlorophytum comosum grows to about 60cm tall on average and the long, narrow leaves reach a length of around 20–45 cm. Usually a maximum of 25 millimetres wide, this spindly foliage is what gave the plant its ‘spider’ nickname. These plant’s have quite a wide spread and can usually be repotted once per year for maximum growth.

Where Should I Keep It?

Spider Plants grow best in bright to moderate indirect sunlight. Too much powerful and sustained sunshine can easily cause brown spots on the plant’s delicate leaves. Unlike many other species of African origin, the Spider Plants grow quite well in most temperate environments, so an average temperature of between 13 and 18 degrees is perfect. They also appreciate humidity making them a popular choice for bathrooms.

How Often Should I Water It?

In the Spider Plant’s initial stages of growth, it doesn’t require too much water. Water it only occasionally to avoid over-saturating its delicate roots while its small. Then, once the plant is looking more fully developed (between 6 months and 1 year in to its life), you can begin a moderate watering schedule – once per week. Keep the soil moist but not waterlogged during the spring and summer and dial back the watering during the colder winter months.

Looking after a baby Spider Plant is remarkably easy. These hardy little blighters tolerate a surprising amount of accidental abuse and neglect, making them the perfect houseplant for newbie collectors. As long as you provide them with a cosy nook to live in, a well-drained pot and plenty of filtered light, these exotic perennials will flourish for you.

Subscribe and get the latest news and offers direct to your inbox.

Come and say hello. Whether you are on the hunt for your wedding flowers or looking for a gift to treat a friend – we got you!